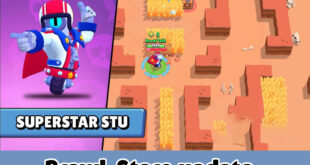 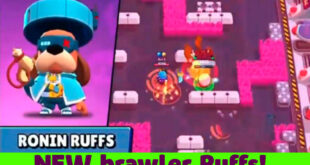 Finally a new huge new year update for Brawl stars is available! In this update, a pirate theme has been added and two new fighters let’s take a closer look at this update.

She is an entomologist and assistant to the rose, so her main attack must hit her target so that her next blow becomes stronger. She has a sniper attack, which uses drones-drones as bullets, and her super attack is very cool, she releases a small swarm of bees that can pass through walls, slows down and poisons enemies.

She takes one sniper shot, which deals 1120 damage from the first shot and becomes stronger in the next attack, reaching 3080.

Bea darts do 120 damage per second while enemies are poisoned. Bea avoids a specific damage with 1 health and gets an instant shield. Strength is again available after it is defeated.

In addition, there is already a skin in this Bea update called Ladybug Bea.

Max wants to be a super hero, but she’s not quite there, so she drinks a lot of energy drinks to move faster. She’s super fast!

In his main attack, Max / Max fires a quick shot.

Max shoots with fast flashes of 4 lasers, which cause 346 damage per laser beam, which totals 1384 per round.

Super attack Max / Max: a circle is formed in which he accelerates all friendly fighters inside, so that they can move faster and attack enemies on the battlefield.

In addition to all this, we are waiting for a new game mode, which also comes with this update. This new game mode is called “PRESENT PLUNDER” (Gift Theft). In this game mode, your goal is to steal gifts from your opponents before they steal yours.

A new article has been posted on the site which provides a link to download the new version of the game Brawl Stars v.24.142 with the new fighters Max and Bea