Today we were shown another update to Brawl Stars, added new skins, maps and a new fighter Meg.

Her health stock is also small. But this is nonsense – after all, as soon as she charge the Super, a miracle happens. she summons her repair robot, and then they cannot be stopped. The main attack – it uses two laser cannons, rapidly firing eight charges. Its Super button has a special mechanic. She activates an additional attack that inflicts colossal damage to all enemies in the affected area. This attack charges quite quickly, but the robot’s main attack does not affect its charge. And be careful – if Meg saddles the robot, her health points will decrease.

This means that sooner or later it will return to its normal form. When Meg’s health bar reaches zero, her robot breaks down, but Meg herself returns to battle. So it can be eliminated only by destroying the “regular” Mag. Mag is the sixth legendary fighter.

The original version of Brawl Stars 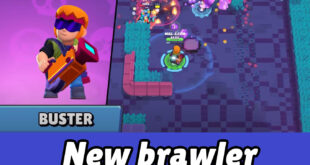 The post will be updated with new news. Today there was a presentation of the …