Anyone who likes Brawl Stars will appreciate the ReBrawl mod. All fighters, skins, and unlimited resources are available in the mod.

Supercell developers create many games that are gaining great popularity and one of them is the most successful – Brawl Stars. It has millions of players all over the world. And of course, a large number of mods are released for such a popular game, one of them is ReBrawl

The mod consists of 3 parts, they were created by Supercell fans. By using the mod you will have unlimited gems and many new features not found in the original Brawl Stars game. In this post, I will tell you about the new features that will be available in the mod.

Get acquainted with how Brawl mods work and choose the mod that you download and install, I recommend watching all the mods

The first version is ReBrawl Classic, similar to the original version of the game with minor improvements. New new fighters and unlimited resources will be available to you.
The second version is ReBrawl Mods in this version, the mod developers have added new skins and maps, moreover, they are updated every Friday and will not let you get bored.
The third version – ReBrawl legacy – is a mixture of the two previous versions, but the main advantage is the support of older versions of Android devices 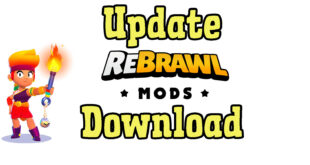