After showing the next Brawl Talk on 08/27/2022, the game was updated. In the new season of the Robot Factory, as usual, new cards, skins and of course new brawlers — SAM and GUS are substituted.

Sam is a new brawler

Gloves are his superpower, so this is the first fighter who has a super charged at the very beginning of the game. If Sam is not wearing gloves, then he attacks weaker, but faster. At the same time, with gloves, he always has a full scale of Super. When activating the Super in gloves, Sam throws them, causing damage to everyone whom the gloves touch.

Gus is a support fighter who can heal and protect allies. Each of his attacks that hit the target fills one division of the scale.

With the scale filled, hitting the next attack on the target will cause a ghost. If an ally touches a ghost, it will restore some health. There may be several ghosts on the map.

Super Gas allows you to shield yourself or your allies. To hide an ally, you need to aim and activate Super. To cover yourself with a shield, you need to touch the Super button, as with auto-aiming. By the way, good news. Gus is an extremely rare fighter, so it will be easy to find him in the box. 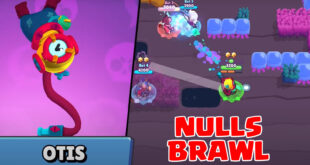