Download Brawl Stars 46.168 with Brawler Buster for iOS and Android

An update has been released with a new chromatic fighter Buster in Brawl Stars on version 46.168.

One of the most interesting updates that will change the game in the near future. The game is undergoing a complete overhaul of equipment, adding complaint buttons and adding several new skins. All this will appear in the near future, and a new chromatic fighter will be available in the 15th season of the Brawl Pass. 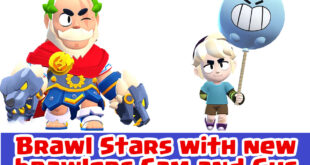